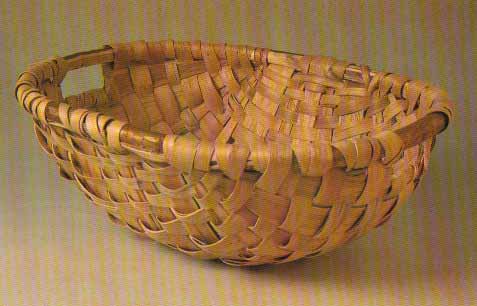 Ok, having begun my Traditional Craft journey around the British Isles down south in sunny Sussex, I am now going to head up north to take a look at the Cumbrian oak swill basket.  Again, I have purely personal reasons for choosing Cumbria as my second destination.  It is my favorite place ever and no it doesn’t rain all the time. Photographed by Marjorie Wright (1889-1973), Image from Museum of Rural Life.

How long swills have been part of life is unclear but similar baskets were used to carry corn in the Iron Age and throughout history they have found use in various industries; mines, mills, ironworks to name but a few.  On farms they were used for sowing, harvesting and feeding animals and in the home they were utilised when ever there was a need for a large receptacle.

Cumbrian swill making centred around the Furness area of Cumbria or Cumberland as it once known and this location would have been a major factor in the success of turning a cottage industry into a trade in its own right.  The woods of  Furness Fells would have provided the coppiced oak for the swill makers and there was a ready market for the swills in the mills, mines and farms throughout the North.

The swill makers were so successful that some intrepid Swillers, as they were called, from Ulverston, Kendal and Gatehouse-of-Fleet moved lock, stock and barrel up to Gargunnock in Scotland in 1865, probably encouraged to come by the local Laird, setting up a rival Scottish Swill making industry.

So what about now?  Fast forward through the twentieth century, passed the World War’s, passed the introduction of production lines and plastic and on to the present day. How are the Cumbrian swill makers doing?  To be honest…..it’s not good!  If there was list of endangered crafts at risk of extinction, then swill making would be on the top of the critical list.  There is only one full time Cumbrian swill maker left and his name is Mr Owen Jones. If you google his name, there are numerous articles on how he is the last in a long unbroken line of swillers and how he has single handedly kept the craft of swill making alive.  I won’t duplicate all that here as there really is a wealth of information on Mr Owen Jones.  There is a particularly lovely video of him making a swill on the Museum of Rural Life website (will post a link when I have worked out how!)

Anyway I do sincerely hope the oak swill is not like the Quagga (that funny zebra with just a few stripes)  the last one died on the 12th August 1883 in Amsterdam zoo.  The world watched and only after it had died did people sit up and say ‘Oh dear, they are all gone – too late now!’

But I like to think there is hope and the oak swill is definitely not as dead as a Dodo. There is an increasing appreciation of traditional regional crafts and their role in our material cultural heritage and a growing willingness to protect associated traditional skills.  I won’t bang on about the importance of Heritage Crafts here, as this is a post about the Cumbrian oak swill but I am planning on giving it a whole post all to itself. Well actually I am going to give it a whole page all to itself!

Next up – I am going to Dorset to take a look at Dorset buttons!!